About 1 year in the business

Well, I have seen a lot of success stories in the flash game business. Most of them are stories about the one big hit game, the holy grail for every developer. Hmm, haven’t found mine so far but I discovered that I am pretty more interested in the search.

I am not a player, though I try to. I like to find ways to torture the mechanic of a game and I am most times not interested in getting a high score rather than doing something that was absolutely not intended by the developer of a game.

I am not an artist but on some special days I have the ability to draw something that amazes me on the next and no matter how hard I try, until the next special I won’t even get close to something a 4th grader could do.

I am not a programmer, though it is fascinating to solve problems in an absolut logical way. Sometimes I think in code. Nerd. But fun.
I don’t have crazy ideas. As an engineer I like symmetry and realism. I admire people like Jack Black who came up with Tenacious D and just sang what came into his mind (or at least lets people think there is no accurate planning in it). Even back in the days with my band I just did write one song that made absolutely no sense, because all the words were a mere listing of things in a strange bar (thinking about that, this could make sense, gah!).

Either way I tried it in my spare time. Bought a computer in April 2009, bought Flash, made a game, made a blog, joined the business (MochiMedia Member since: Jun 18, 2009) and learned. And learned. Just to emphasize this: it is a crazy cool business. All kinds of people, lots of problems, lots of help. A great community with highly creative people that deserve every penny they earn by spreading out so much fun. 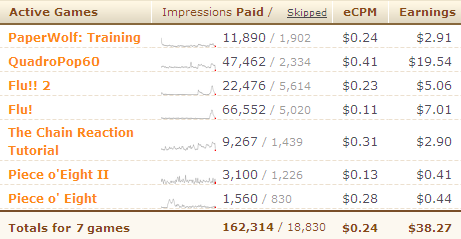 Even though all those games weren’t successful in meanings of monetarization I learned with every step I took. What could possibly work as an icon? I look different at advertisements now. Did you ever take notice of the difference outlines give to text? Or a gradient in the letter’s color? Or colors in general. Awesome. 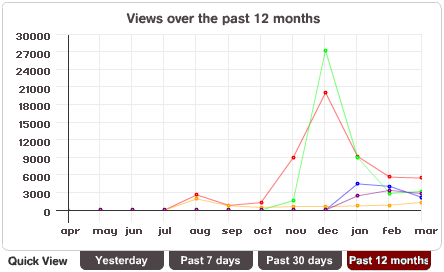 Now that the number of games played is falling there is a good too. An increasing number of plays is via a big social network. And while the apps pull the game from this server I do earn the publisher portion too. And a very good (for me) ecpm comes this way to. Some days it is around $1.50. Now I would need just millions of plays…

But either way I won’t stop here. With flash I discovered something that is fun to use. Nerdfun or so…

The one thing delaying the completion of a new game is feature creep (“I could do that. But it could take some time. Hmm, maybe I’ll postpone it for a sequel. But if it is a major thing missing, who would look at the sequel? Gah, I’ll do it!”).

Well, up the mugs, yours truly,

This entry was posted in game development, mochiads, monetization, xperiment and tagged ad revenue, flash game monetization, get rich fast with no work. Bookmark the permalink.

One Response to About 1 year in the business