I learned yesterday that I should not expect obviousness.

In ‘Piece o’Eight II’ there is a button that says ‘RESET SPEED’. To go a little more into detail, the game is a simple target clicker, where the target gets faster (and scores higher) with every click. Now, there is a natural border to human reaction velocity. There is an unbelieveable high percentage of players scoring 0 (zero) points, because the target was too fast.

There is a help screen in the game that is displayed once before the game starts. It is a click-away screen with instruction for everything EXCEPT the ‘RESET SPEED’ button. Because this button just resets the target’s speed. Per MochiAds version control I uploaded a new version with the explicit description of the button. I am a bit frightened in the progress of a more complex game than the clicker.

Does one have to explain such things? What would you do?

EDIT (in reply to Michael’s comment): Have a look, that’s what I see after hitting the coin: 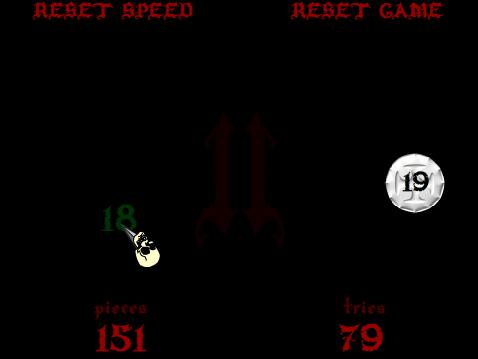 Screenshot directly after a succesful hit

Now what can that be? I’m sure that I embedded all numbers in all dynamic textfields (except the highscore screen but I discovered that later).

This entry was posted in game development and tagged flash game, help screen. Bookmark the permalink.